It’s a typical spring day in the Scottish Highlands; dawn breaks with a bitter but fresh bite to the early morning air.  The ground is covered in a thin layer of frost, ever so gradually melting away as the temperature gauge on the car dashboard slowly rises.  As the sun tries desperately to break through the mountain mist, I park the car in the town of Crianlarich; the half way point on the West Highland Way. 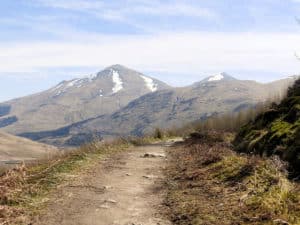 The previous day, I pondered over whether to go with tradition – head north for a day hiking in the hills, relaxing at my own leisurely pace with a packed lunch in my ruck sack and the SLR camera at the ready.  My mind, however, was telling me to stretch the legs a little more, put in some extra mileage and make the most of the limited, mid-March daylight hours.  It was an easy decision – I was going to run a section of the West Highland Way.
After a ninety minute drive from my home in central Scotland, I was within touching distance of this famous trail.  From the rolling East Dunbartonshire countryside and the woodland paths of Loch Lomond, to the peat bogs of Rannoch Moor and the stunning views across the Glencoe mountains, the variety of landscapes along this fantastic route provides ninety six miles of blissful enjoyment for the avid walker, runner and nowadays, even cyclist.

Today I would run a 25 mile section of the trail from Crianlarich to Kings House.  Leaving the car behind, I traced my way up the hill along the path leading to the trail.  I feel a little knot in my stomach, as if nervous about some life or death situation, but I’m not sure why.  “I’m only going for a run, how hard can it be”, I say to myself as I jog steadily towards the start point.  Why the butterflies?

I suddenly come to realise that, although I’ve walked the WHW before, on more than one occasion, I’ve never actually done any running here – or anywhere else in the Highlands for that matter.  I have this doubt in my head that I’m somehow not fit or experienced enough to take on this type of terrain in a pair of running shoes as opposed to the usual hiking variety.  I eventually break through the tree line 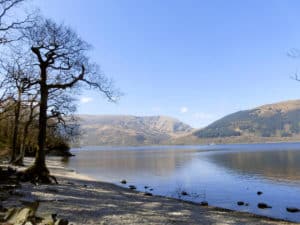 and reach the top of the hill.  I’ve reached the Crianlarich diversion, where the WHW allows people to leave the trail and descend into the village.  It’s at this point I suddenly feel a burst of energy and excitement, “I’m going to run the West Highland Way and I’m doing it right now”.  It was as if I was the only person to have ever attempted the crazy idea of running this world famous walking route in a pair of extra-grip trainers and tiny shorts.

As I steadily find my feet, getting used to the bumpy conditions underfoot, the feeling rushing through my veins is exhilarating.  With a spring in my step, I feel light and unencumbered in my running gear.  I can go fast on the down hills, take my time on the up hills with this sense of uninhibited freedom that only a runner can have.

Before long, I make my way through the dense woodlands high above Crianlarich and descend to cross the road which connects the aforementioned with Tyndrum.  After only a couple of miles, the landscape had changed already.  I’m now jogging across the River Fallon onto flat, open farmland.   Any idea of this being a less interesting section of the trail are quickly quashed by the stunning, snow tipped mountainous back drop on all sides.  After meandering through the fields of sheep and exchanging pleasantries with some campers, the trail follows a riverside path all the way into Tyndrum.  Six miles into the day and The Green Welly Boot stop is the ideal place for a toilet break and light refreshment.

With the first section complete, I’m pleasantly surprised at my level of fitness.  In truth, there haven’t been too many inclines to negotiate, but I know that’s still to come.  I’m finding it difficult to gauge how the day will go as the typical distance anyone tends to attempt in a day on the WHW is around fifteen miles – but I’m doing twenty five – is that even possible for me? 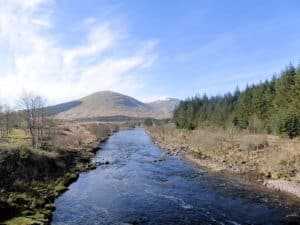 From Tyndrum, the mountains really do start to close in around you.  No longer are they admired from a safe distance.  As you head further north towards Bridge of Orchy, the road which is visible from the trail appears carved into the hillside – more evidence of this now more dramatic landscape.  Looking around, you need to crank the neck that little bit more to see the tops of the mountains, with a little bit of nervous tension at the thought of having to climb that high, through the snow, just to get out of this mountain cauldron.  In truth, the seven mile section of trail from Tyndrum to Bridge of Orchy is relatively flat, with some license given for the gentle climb out of Tyndrum.

I reach Bridge of Orchy after three hours of running, covering thirteen miles of the West Highland Way.  I take a seat by the beautiful stone built bridge across the River Orchy and spend a few moments to reflect on the day so far.  It’s 2014 and I’m relatively new to trail running. Most of my training has been on the roads, with all previous races and events done on the hard stuff.  I needed a change; and what better way to keep up the running than to head the hills and trails.  It’s certainly tougher but so much more rewarding.  As I sit by the bridge I realise that I’ve enjoyed today more than I could have imagined and I feel nowhere near as fatigued as anticipated.  As a walker and hiker, the long straight stretch from Tyndrum to Bridge of Orchy was never my favourite section, but as a runner, this was suddenly transformed into a Highland style running track with the most amazing panoramic views.  Trail running was very quickly becoming my new favourite past time.

I know I’m roughly half way through the day now and it’s been fantastic to this point.  I’ve covered twice the distance than if I’d walked and enjoyed it twice as much.  From memory, there’s only one climb of note to contend with from here and it’s immediately after Bridge of Orchy.  The trail climbs from 150 metres to 320 metres in just over a mile, which should be the most strenuous climb of the day.  It’s easy to feel the need to run up the hill at the same pace as any other stage, but with time on my hands and not a care in the world, I decide to stick to a slower pace and enjoy the peace and tranquillity of these beautiful surroundings.  The climb from Bridge of Orchy skirts around the edges of another forest and, on a still day such as this, stopping for a few seconds to listen to the natural world really is a wonderful thing.  Birds singing, branches lightly swishing in the wind, creatures rustling around in the undergrowth – I would rather be nowhere else at this moment.

The view from the top of the hill is magnificent.  Looking all the way down Loch Tulla is stunning; the puffy white clouds and ancient Scot’s pine trees which litter the water’s edge reflected in a perfect mirror image from the calm waters of the loch.  This is actually the first Loch walkers and runners will have encountered since leaving behind Loch Lomond, some twenty five miles further south.  Shortly after beginning the descent off the hill, the very remote and often wonderful sight of the Inveroran Hotel comes into view.  I’m tempted to nip into the hotel for a quick drink, but the downhill section just prior had allowed me to recharge the batteries and get ready for the off once more.

After a mile or so along a quiet country road, the trail heads into the infamous stretch across Rannoch Moor.  Glorious in the sunshine, 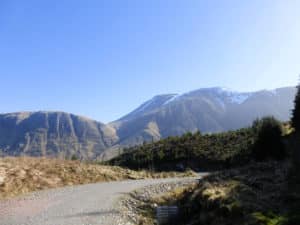 torturous in the wind and rain; this stage of the West Highland Way can be a force to be reckoned with.  There are no great climbs or descents and it’s a very straightforward route, but it is such an exposed area that there is no hiding place if the weather does take a turn for the worst. At around 50 square miles in size, Rannoch Moor is one of the last remaining wildernesses in all of Europe and is considered a Site of Special Scientific Interest.  The moor is a plateau of peat bogs, lochs, rivers, streams and rocky outcrops surrounded by mountains to the south, west and north.  There is no way across the Moor from west to east, unless of course, you’re on foot.  The moor officially extends for 50 miles, from Argyll & Bute in the west to the Munro of Schiehallion in the east, however, it is most famous for the isolation of the exposed peat rich moorlands near Kingshouse and Glencoe.

Fortunately for me, it’s a pleasant spring day, although there are a number of strategically positioned snow patches littering the trail across the moor.  The snow certainly isn’t knee deep but I do wonder how the trail must fare with the snow at its highest point, the Devil’s Staircase, some 10 miles or so further along the route.  Maybe just as well I’m not going that far today.The twelve mile stretch across Rannoch Moor is over all too soon.  I’ve reached the main A82 road which connects Fort William to the south and beyond, at which point I’m aware the Kings House Hotel is only a few minutes further along the track.  As I board the bus to take me back to Crianlarich, I dearly wish I had planned better and arranged a night at the hotel before running the final twenty five miles to Fort William.  Images of running up the Devil’s Staircase, looking across the Glencoe Mountain range, descending into the town of Kinlochleven only to climb again for the final leg past Ben Nevis and into Fort William are all to fervent in my head and it pains me to have to leave it all behind.

As things turned out, this twenty five mile run was merely a pre-cursor to the full run which I completed over three days later that year.  Hiking the West Highland Way and Scotland’s other Great Trails may still be the most popular choice, but with trail running and other outdoor sports becoming more popular than ever, we are likely to see an increasing number of trail runners on Scotland’s hills and mountains for many years to come. I love running across Scotland; whether along roads, canals, hills or mountains and, due to the fact that almost everywhere here is so accessible from the country’s main cities, I never feel too far away from any of these possibilities.

Scotland is a beautiful country and whether you prefer to walk, run, cycle or swim – we really do have something for everyone! ~ Ross Mackey